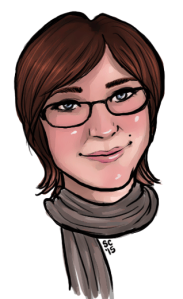 Shannon Marie Chavez is both an artist and a writer.

Shannon has worked as a graphic artist for over 17 years.  For 12 of those years she worked as a staff artist for newspapers, working on their many print products, including magazines. All the while, she was doing freelance work and writing.

Shannon also writes under the name M.S. Chavez has published a number of short stories. She works mainly in speculative fiction and has published fantasy, science fiction, and literary fiction pieces.

She is currently working on a series of rural fantasy novels, as well as a women’s fiction novel.

Her short fiction can be found at Wattpad.com where her collection Bittersweets is one of their featured books. It currently has over 300,000 reads.

Tales from the Tower World

The Girl in the Flurries in Poplorish

Doll Head at This Zine Will Change Your Life

In October of last year, I met Kassie, the founder of Sin Cal Derby Vixens. She runs a fabulous little BBQ place in Tulare, CA called Pitty’s. After I built the Sin Cal Derby Vixens website, I helped walk her through setting up her own site, Pitty’s BBQ. Thanks to the wonder that is WordPress, she did an amazing job.

When she needed a flier for her cruise night event, she came to me again. I designed a flier to help promote this monthly event. I had the pleasure of attending and helping to promote Sin Cal Derby Vixens at the first of the cruise nights. I also enjoyed one of her amazing chicken club sandwiches. I’m hungry now just thinking of it.

She also mentioned wanting to change up her logo to include both of her beloved pittys. So after she provided me with a photo of her pups, I created an illustration of them and added the text.

Now that I’m back in Seattle writing this up, I am missing my Pitty’s BBQ fix.

Over the last year, I dove into Roller Derby thanks to some amazing friends in California. During that time, I built the website for the team, worked on promotional and fundraising materials.

I also got pretty darned good at roller skating and am continuing my Roller Derby obsession now that I’m back in Seattle.

Below is a screenshot of the site shortly after it was first created. I also created a number of fliers to promote the team and our fundraisers. 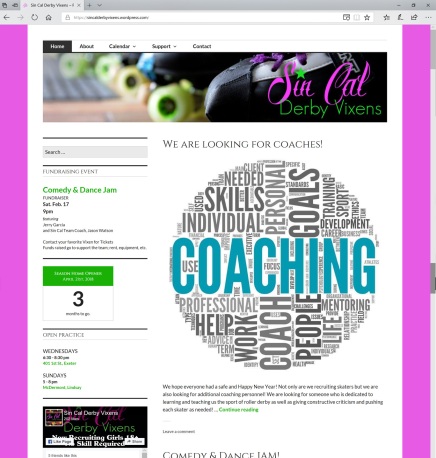 Visit this site at SinCalDerbyVixens.com 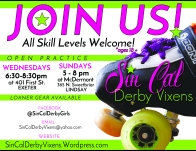 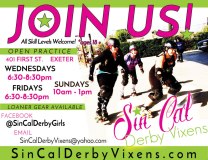 I Forgot How Much of a Challenge Drawing Digitally Can Be

I’ve been needing to work on my art more. When I’m not writing, I usually draw. Since I’ve been physically better recently, I have the energy to be creative.

Writing isn’t coming to me right now, so I thought I’d sit down and draw. I seem to be quite out of practice. This little drawing turned out pretty decently, but the number of blue line drafts I had to go through to get to this point really surprised me.

Does all my digital art always take this much effort?

I’m not sure if I’m simply out of practice, or if it’s always difficult. I’m thinking it’s a little bit of both.

A month or so back, I binge watched Anne with an E. I loved it, the main character was just adorable. I love how not conventionally pretty the adorable little actress is.  I also adored how the character was someone I could relate to, a dreamer.

So of course, I felt compelled to do some art. I then downloaded all the Anne books from LibriVox. It was interesting the ways the story was updated, and I look forward to the next season.

The little piece to the right sat on my drive, half finished for a while. It needed considerable work, and I was just not feeling it. Though I felt it captured the essence of the character, it just wasn’t all that great. So instead of fussing with attempting to fix what I had, I layered some of my flower photos over it and, played with filters, and got something I feel is presentable.

It’s more than a little frustrating to be this far out of my art groove, but I’ll get back to it. Slow and steady progress is better than nothing, and this summer, I have every intention of progressing once more.

Creating a Logo for Rise Up Arts

A while back I was asked to create a logo for a non-profit called Rise Up Arts.

I was given some guidance, some ideas, and a few references.

When ever I start on a project, I like to ask those I’m working with to look around at the sort of logos and designs they like. The board of directors for this org did just that.

While I no longer have the original examples they sent me, they gave me a distinct impression. They wanted a vector image, and they wanted a flame, and originally, I was under the impression they wanted hands.

So, I sat down and did a quick concept sketch:

It wasn’t quite what they wanted. It was too rough, too detailed, and I got the feeling that they couldn’t see the final piece through the rough sketch.

So I tried two more, with some color variation:

They sent me a few more examples (again, I didn’t save the, unfortunately) so I tried once more, and decided to just go in with a vector image rather than continue to get the look right in Photoshop.

I eliminated the hands, and we did quite a few tweaks.

Eventually, we narrowed it down, and I did a couple more versions with text and different color options.

The final result was this version, which I later modified for one of their events. 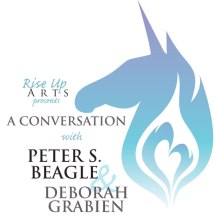 Designing a Cover for Joy Ride

*Apologies to those who receive emails from this blog and have seen this particular post before. I’m updating my site and a few things were lost in the shuffle, this blog update was one of the casualties.

A while back, I worked on a cover design for a friend, M.B. Austin. She wanted to put her story, Joy Ride, out on Smashwords , Wattpad, and other places. So she asked me to come up with a cover for her. I’m a big fan of her Maji stories and was happy to do so.

She has a book coming out soon, by the way, so please be sure to keep an eye on her website for more news. I’m very excited to see Strictly Need To Know in its final form.

Anyway, back to the design for Joy Ride.

She gave me the story to read, as well as a few thoughts of what she had envisioned. She also gave me the Smashwords specifications and I began working on a design that would work for print an digital media.

I searched my usual free and copyright free clip art sources and found a limited amount of art that would work. I was inspired, though, by the cassette tape concept, and decided to freehand a cassette tape for a few of the designs. I think it worked out rather well.

Anyway, this is the basic process I go through while designing covers.

First, I sent her a bunch of designs to see what she thought and to help narrow it down.

This was the first batch:

She gave me a bunch of feedback, and I went back to work. This was the second batch:

She finally settled on this design, and I sent it to her in several formats, high resolution as well as web resolution. 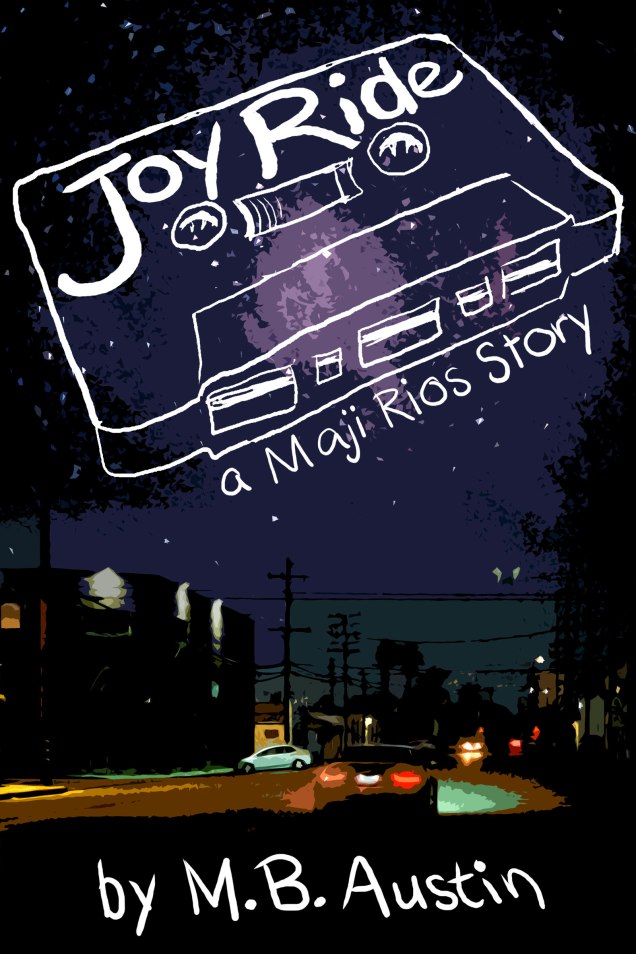 A portrait and character drawing

Just completed a colored portrait for my cousin, Jeanie and a character drawing for my friend, Chrysoula.

I’m open for commission work. Colored portraits like the one above are currently $25, black and white pieces $15.

Email me at dreamingthought@gmail.com for more information.

A few more examples of what you can get for $25.

Digital Drawing I did for my cousin Jenn. I have one I need to do for my friend Chrysoula, my cousin Jeanie, and some color variations to do Rhiannon. I think that’s it for art I’ve promised/owe people. 🙂

speak up now if you were on my art list and not mentioned above!

But those will take more explaining.

Sarah, a character from my novel.

Fan art for When Marnie Was There

Me and my kiddo. 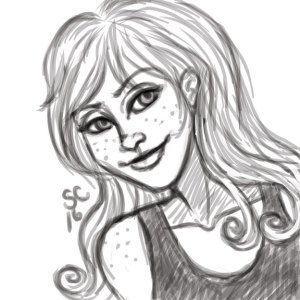 Random doodle of Elloreah, I guess. 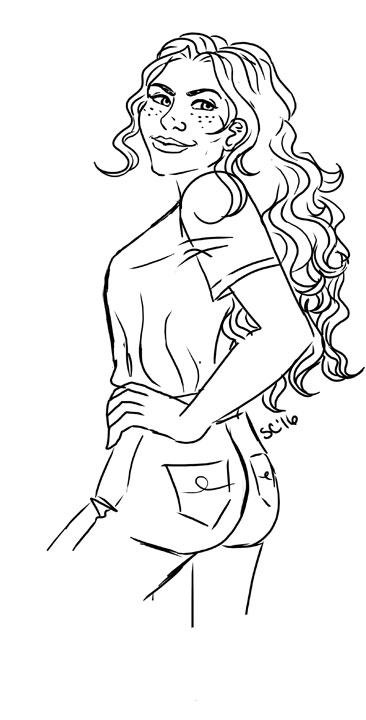 Just a random doodle to kind of decompress. This is the first time I’ve actually drawn this yet to be named character. She’s the protagonist in a novel or potential series that I’m refusing to think too much about because I have so many other projects I need to actually finish.

She’s the daughter of some of my other characters. Too lazy to color right now. I’m thinking very dark brown hair with reddish hues, brown-red skin, and maybe green eyes. Or brown. Green is so tempting, but heroines so often have remarkable eye colors… a nice amber brown would probably be best.

She’s a shifter, red wolf. Was planning on fox in the beginning, but went to a red wolf exhibit this summer and was sold after watching those gorgeous animals. She works with dogs, loves the outdoors and horseback riding. Has an older foster/adoptive brother and father who are both pretty distant. Moved away from home to live with a caretaker I’ve yet to decide on.

Other than that, I’m trying not to peg down her story too much because I have a Chick Lit novel I am working on plotting and outlining.

Needed a break from my commission work and decided to draw up some quick fan art.